The ban on live sheep exports has just been lifted. Here’s what’s changed

Independent observers will be on board the ships exporting live sheep to keep an eye on animal welfare.

The ban on live sheep exports was only ever intended to be temporary. The Australian government enacted the ban earlier this year to prevent sheep from being shipped to the Middle East from the beginning of June through to September 22 – the highest heat stress risk period.

The ban followed revelations of sheep suffering and dying from heat stress on voyages from Australia to the Middle East after a disturbing video was revealed. AAP Image/ Trevor Collens

During this time, sheep are adapted to the cooler temperatures of a southern Australian winter. And for this reason they find it difficult to cope with the sudden increase in temperature and humidity as the transport vessels undertake the two week journey to the Persian Gulf region.

Read more:
Can meat exports be made humane? Here are three key strategies

This ban affected any voyages where the vessel would travel through waters in the Arabian Sea north of latitude 11°N at any time – effectively stopping the Middle East sheep trade as the entrance to the Gulf of Aden is at 12°N.

Why are Australian sheep shipped to the Middle East?

It seems outwardly strange to ship live animals (and their feed) across an ocean just for them to be slaughtered for meat shortly after arrival.

But there is a demand for live Australian sheep in the Middle East, which means it’s economically viable for exporters to ship animals from southern Australia, particularly out of Fremantle, but also from ports including Portland and Adelaide.

Western Australian farmers received an average price of A$117 for each exported sheep during 2018, so the price of each sheep at the other end must be substantively greater.

So, the Australian government has been required to “push” animal welfare requirements down the industry supply pipeline, rather than having these requirements being “pulled” through by market demand.

What we do not know is how the economics would change and whether additional market lines would open up for boxed meat – rather than live sheep – if the live trade were to be stopped.

The ban was one of the consequences for the live sheep trade after disturbing video footage was revealed in April 2018. The graphic video showed sheep suffering and dying due to apparent heat stress on voyages from Australia to the Middle East.

The government immediately commissioned a review into the conditions for the export of sheep to the Middle East during the northern hemisphere summer.

That review made a number of recommendations, which were then implemented by the government, including increases in space allowance for sheep on board and independent auditing of ship ventilation systems. Government-appointed observers were also included on voyages, and the notifiable mortality threshold reduced from 2% to 1% of animals during a voyage. 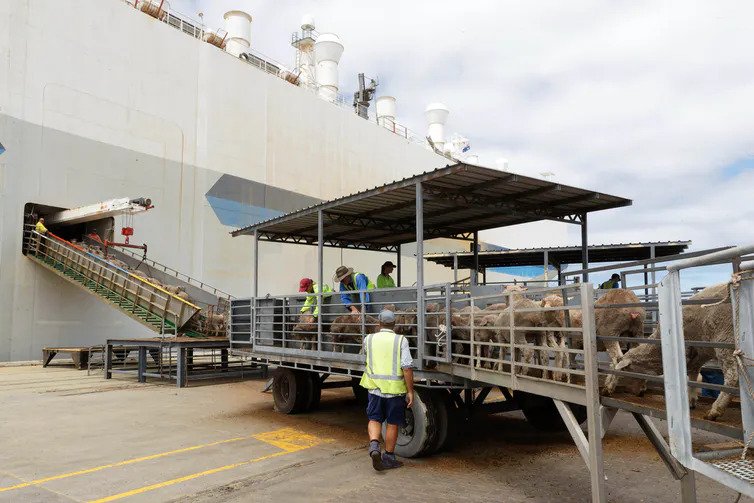 Since government-appointed observers were included on voyages the notifiable mortality threshold on voyages reduced from 2% to 1% of animals. Trevor Collens/AAP

A key recommendation was that the regulatory framework should change from minimising mortality from heat stress to, instead, safeguarding animal welfare.

The government then commissioned further reviews to determine how to implement this recommendation, including an independent technical reference group.

This report was released on September 20, and the government has stated it will be used along with other information to determine the regulations for how (or if) live sheep shipments occur during the northern summer of 2020.

Are the changes sufficient?

The live export industry argues they have succeeded in making substantial changes to how it operates since the original footage was revealed in 2018.

Whether these will be sufficient to prevent further revelations of heat stress incidents or other adverse animal welfare outcomes remains to be seen.

Including independent observers on voyages to keep an eye on animal welfare should increase the transparency of what happens to sheep during live export shipments. Although, there has been criticism of the delay in reporting from this initiative.

The new arrangements in place since 2018 and the temporary ban from June to September are unlikely to satisfy animal welfare advocates who are against live exports. On the other hand, the live export industry argues the sector is important for Australian livelihoods, including supporting sheep farmers.

What’s more, the current coalition government has repeatedly stated its commitment to maintaining a live export industry. Interestingly, the 2019 federal election was the first time there was a clear policy difference on the issue between the major parties, with the ALP committed to a phase-out of the live export sheep trade.

It will be interesting to watch whether this policy difference will remain after the ALP’s review of its 2019 election policies.

But in terms of what more needs to be done, it’s likely impossible for policy-makers to satisfy all parties in the live export debate.

New overarching standards for the export of livestock from Australia are scheduled to be introduced soon, covering more than just heat stress risk.

However, those who are against the trade in live animals are unlikely to be persuaded to desist in their efforts. A repeated history of damaging incidents and revelations serves as a reminder of what may happen again in the future if the industry does not get to grips with its animal welfare responsibilities.