Here’s an issue that never quite goes away.

In Europe, immigration policies are tightening, not unlike they have in Australia over a period.

But concern is raised every time a disaster, especially a boat disaster, happens.

Are European States acting illegally if they fail to lend assistance when they stand by and do nothing in the face of impending tragedy in their realm?

We republish this piece from The Conversation responding to this question.

In the same week that more migrant lives were lost at sea, the EU’s migration policy in the Mediterranean has been brought to the attention of the International Criminal Court (ICC).

It emerged on June 3 that the ICC had received a legal submission calling for the EU and some of its member states to face prosecution for enacting migration policies “intended to sacrifice the lives of migrants in distress at sea”.

The sharply worded submission was brought by international lawyers who have asked the ICC to open an investigation into EU migration policies and whether a prosecution could be mounted under international law.

The lawyers assessed European migration policies in the Mediterranean over recent years, paying particular attention to the end of Italy’s military-humanitarian rescue operation Mare Nostrum in 2014 and the subsequent shift to policies focused on deterrence. Their submission claims that this shift toward deterring migrants from crossing the Mediterranean to reach the EU resulted in:

(i) the deaths by drowning of thousands of migrants, ii) the refoulement of tens of thousands of migrants attempting to flee Libya, and iii) complicity in the subsequent crimes of deportation, murder, imprisonment, enslavement, torture, rape, persecution and other inhuman acts, taking place in Libyan detention camps and torture houses.

According to the ICC submission, these “crimes against humanity” were consciously perpetrated by the EU and member states in the belief that sacrificing migrant lives at sea would stop other migrants from making risky voyages across the Mediterranean. 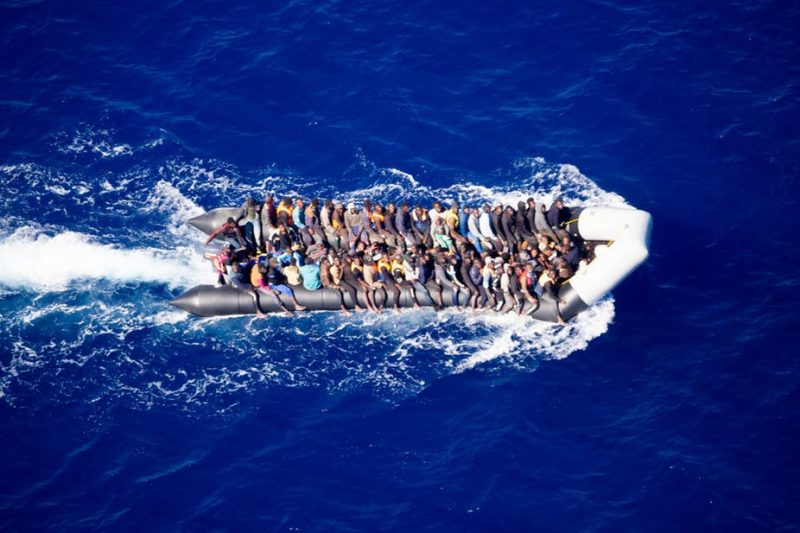 Migrant boat spotted by Moonbird aircraft on May 29 in the Mediterranean. Moonbird/Sea-Watch

Sending migrants back to Libya

The authors assert that European authorities have “channeled their policies” of deterrence through the so-called Libyan coastguard. Interceptions of migrant boats by the Libyan authorities have resulted in tens of thousands of people being sent back, or refouled, to Libya in recent years – and my research is showing they are increasingly being co-ordinated by Italian and EU authorities from the air.

Read more:
Migrants calling us in distress from the Mediterranean returned to Libya by deadly ‘refoulement’ industry

I’ve have been told by people working for NGO search and research organisations, that a greater presence of European helicopters and aeroplanes patrolling the Mediterranean, for example those of the EU military operation Eunavfor Med, have been observed over the Mediterranean in the last few months. These aircraft have reportedly informed the Libyan coastguard about the whereabouts of migrants boats so that they can intercept them.

This increased aerial involvement of Eunavfor Med aircraft and helicopters stems from a European Council decision in late March 2019 to suspend the deployment of the operation’s ships, but strengthen surveillance by air and reinforce its support for the Libyan coastguard.

The result is that migrants are being forcibly returned to Libya, an active war-zone, where they are held in inhumane detention camps. NGOs have documented that many migrants have been exposed to systematic forms of torture, sexual violence, and extortion at these camps.

The submission to the ICC highlights clearly what migrants and their supporters continue to experience and witness on a daily basis: the violent consequences of European border and security policies that have turned the Mediterranean Sea into the deadliest border in the world.

In response to the ICC submission, an EU spokesperson highlighted the EU’s respect for human rights and international and European conventions, emphasising that its: “Priority has always been and will continue to be protecting lives and ensuring humane and dignified treatment of everyone throughout the migratory routes”. But the reality at sea is a different one – European non-assistance has become routine in the Mediterranean.

Spotted from the air

On June 2, a shipwreck occurred off the coast of Libya leaving dozens of people presumed dead. This will further raise the Mediterranean death toll that has surpassed 500 fatalities in 2019 already, despite a dramatic decrease in migrant crossings. On the same day, the survivors of another Mediterranean voyage testified after disembarking in Genoa, that they had lost travel companions at sea – despite the fact that Italian and other authorities had been alerted to their odyssey and were monitoring it.

After spotting the migrant boat with about 100 people on board on May 29 and relaying their distress, the civil reconnaissance aircraft Moonbird, run by the NGO Sea-Watch, observed that the Italian navy vessel P490 didn’t carry out a rescue operation despite being in the vicinity of the boat in distress. In the evening that day, the Alarm Phone, an activist hotline supporting migrants in distress at sea, of which I am a member, was also alerted to this boat.

Despite raising awareness about the emergency situation in public and directly with European coastguards, it took nearly a day until a rescue operation was launched. Because of this delay, the migrants, including many children, had to endure a second night at sea.

The daily dramas in the Mediterranean are not the result of a lack of European engagement at sea. As the submission to the ICC highlights, they are the consequence of European migration policies that have actively “turned the central Mediterranean to the world’s deadliest migration route.”

Decades of research has shown that the unabated criminalisation of migration has led to an increase in migrant fatalities around the world as those seeking to escape by crossing borders have had to revert to longer, more expensive, and more dangerous migration routes. Those dying in the Mediterranean today are the inevitable result of Europe “protecting” its borders.