Home 2019 May 9 Julian Assange has refused to surrender himself for extradition to the US. What now?

Julian Assange has refused to surrender himself for extradition to the US. What now?

We don’t often have such ‘legal’ posts as this one in our Life Law and Culture Department of the Shipping News, but this story has elements of each – life, law and culture.

What Assange stands for, let alone who he is, both fascinates and confuses.  We don’t all agree with what Wikileaks was about but the primary question concerning a citizen’s right to know what their Government is doing in their name doesn’t go away.

This piece gets to the technical nitty-gritty of what is likely to happen next with Assange. One day a movie will try to explain it all.

In the case of Julian Assange, focus has turned to the United States’ efforts to extradite him from Britain to the US to face a charge of conspiracy “to commit computer intrusion”.

The initial extradition hearing, which took place on Thursday, was a preliminary step in what will be a long, drawn-out process. Assange appeared before the court by video link and made it clear he opposes extradition. The next procedural hearing is set for May 30.

Barrister Jennifer Robinson, one of the lawyers on Julian Assange’s legal team, and WikiLeaks’ editor-in-chief Kristinn Hrafnsson speak to reporters outside Southwark Crown Court in London on May 1. Facundo Arrizabalaga/AAP

Assange had been arrested by London Metropolitan police on April 11, and removed from the Ecuadorian embassy. He had been granted asylum by the embassy seven years earlier, after fleeing arrest out of fear he would be extradited to the United States.

Earlier this week, Assange was convicted of breaking the conditions of his bail in 2012, and sentenced to 50 weeks imprisonment. 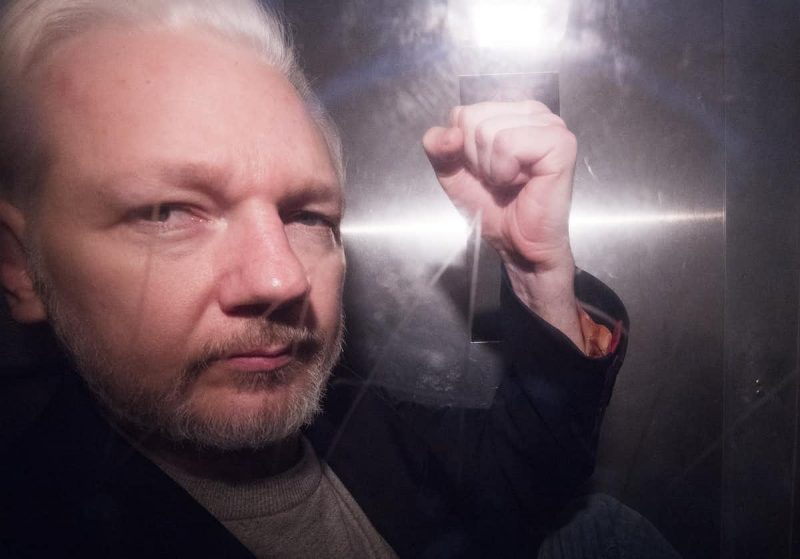 Wikileaks co-founder Julian Assange, in a prison van, as he leaves Southwark Crown Court in London on May 1. Neil Hall/EPA

Read more:
Is the Assange indictment a threat to the First Amendment?

The actual extradition hearing will be some time off, following these preliminary hearings. After an initial decision by a judge, either side may have access to an appeal procedure through the courts.

Regardless of that outcome, the final step rests with Home Secretary Sajid Javid. Despite pressure from UK lawmakers, Javid cannot make a political decision on whether to extradite Assange – rather, his role is to approve a court order for extradition unless there are statutory provisions that prohibit it.

His decision to extradite Assange might also be subject to High Court appeal.

Extradition is a legal process that states use to facilitate the transfer of a person from one jurisdiction to another in order for that person to be prosecuted for a crime. Many extradition arrangements between states rely on bi- and multilateral extradition and mutual assistance treaties.

The US and UK signed an extradition treaty in 2003. Under this treaty, both countries agreed to extradite people sought for trial or punishment for extraditable offences. An offence is extraditable where the conduct is punishable under the laws of both countries

by deprivation of liberty for a period of one year or more.

The offence for which Assange is wanted in the US is punishable by up to five years’ imprisonment. It is grounded in an allegation that Assange engaged in a conspiracy with Chelsea Manning to hack US Department of Defence files, and publish classified information on Wikileaks.

Assange maintains his innocence, and his defenders argue that his extradition would set a dangerous precedent for journalism and the publication of truthful information – particularly as it may affect the US.

It is important to note the parallel, but now lapsed extradition claim from Sweden, which had earlier sought Assange for a preliminary investigation and possible prosecution for rape charges. Assange had claimed an extradition to Sweden to face those charges would result in another extradition from there to the US. Having lost his protection under Ecuador, Assange now faces exactly that prospect.

Extradition is a heavily regulated and multi-stage process. Rules and procedures within and beyond the 2003 Extradition Treaty potentially protect Assange from extradition to the US, or at least constrain its conditions.

The 2003 extradition treaty between the UK and the US explicitly provides:

Extradition shall not be granted if the offence for which extradition is requested is a political offense.

It is common for countries to retain a power to refuse extradition where it is sought in relation to political offences. Such an exemption can protect whistleblowers and others who legitimately challenge the exercise of governmental power.

The UK does not have a statutory or generally accepted judicial definition of a relative political offence. However, the Anglo-American system uses the “incidence-test” according to which

the act must be incidental to and forming a part of political disturbances.

The “requested state” may also refuse extradition if it determines that the request was politically motivated.

Assange’s lawyers are expected to make this a chief argument against extradition. Such an argument could not succeed on the basis that conspiracy to commit computer intrusion is a pure political offence under UK legislation, because it is not.

However, the UK courts or authorities may regard the charge Assange faces as a relative political offence. Alternatively, they may be convinced by Assange’s argument that his work with WikiLeaks is purely journalistic and the US charge politically motivated.

Read more:
Explainer: what charges does Julian Assange face, and what’s likely to happen next?

The ‘Rule of Speciality’

The “Rule of Speciality” under the extradition treaty offers Assange protection against new charges. According to this rule, an extradited person may only be charged for the offence for which the extradition is granted, or for crimes committed thereafter. However, the requested state may waive the rule of speciality in which case Assange may end up facing more charges than originally specified.

This rule is important for both Assange and the UK authorities. The UK is entirely opposed to the imposition of the death penalty in any circumstances. The UK would be bound to refuse to extradite Assange to the US were he to face charges that carried a possible death penalty.

There will be pressure on the UK authorities to respect the rule of speciality, in which case Assange would face a maximum of five years imprisonment should he be extradited to the US.

It is impossible to say, for now, what awaits Assange. At the very least, following the completion of his current prison sentence, there will be renewed uncertainty about his liberty. Controversy, of course, will persist over whether Assange deserves protection against political prosecution, if he may actually have nefarious links to Russia, or indeed whether the most just course would be for the Swedish charges to be revived first.