Goldfields Girl, written by Elaine Forrestal and published by Fremantle Press (2020), is based on an historically verified, handwritten manuscript by Clara Saunders.

The story is set in the ‘Golden West’ during the late 19th century Western Australian Goldrush era, in the land of ‘sand, sin and sorrow’. 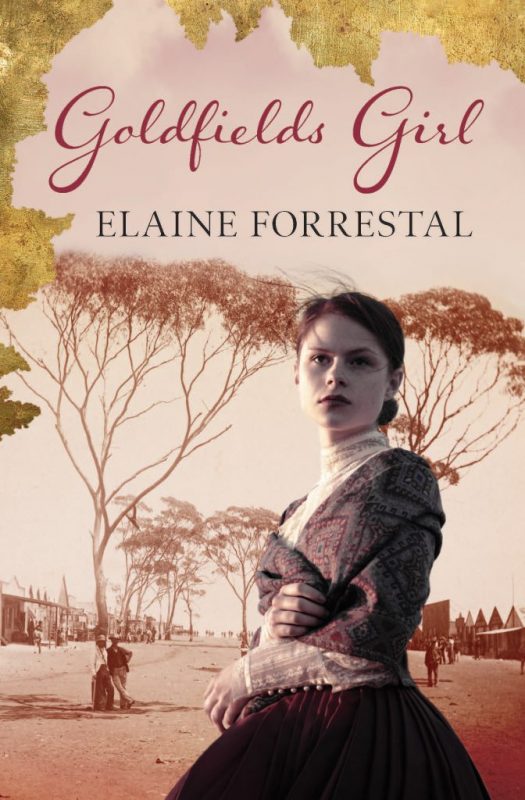 Goldfields Girl follows 14 year Clara, who travels with her mother and sister from Queensland, where her father and brothers work in a mine, to help her sister run her hotel at Southern Cross, 300 hundred miles from Perth. With four daughters and another child on the way, her sister needs all the help she can get with cleaning rooms and catering!

The work is hard and the days are long, but Clara soon finds that she enjoys herself. There are singalongs late into the night, and dances, picnics and riding parties, and she is never bored. As one of the few young women in town she is always in demand for dances and there is plenty of scope for cautious flirting. There are adventures such as the dangerous, thrilling horse chase after Clara’s horse takes off across the plains. Clara develops a sense of wonder that anything is possible.

When Bayley and Ford discover the world’s largest reef of gold about 200 kilometres east of Southern Cross, the 2000 prospectors and miners camped outside Southern Cross decamp and flee overnight in their rush not to miss out. Builders, construction workers and water carriers are not far behind, so when Clara was offered work at the first building in Coolgardie, the Exchange Hotel, she jumped at the chance. Despite her mother’s misgivings she soon left on her new adventure, proud to be a working woman earning her own money.

Within a month the booming town of Coolgardie abounded with new and known characters, mostly living in camping areas with descriptive names such as Tipperary, Little Italy, Montana, T’Othersiders and Sandgropers, all driven by the lure of gold.

Water was harder to find than gold and there was no medicine, but Clara’s black medical encyclopaedia was called on more than once in the camps. Clean water was always a problem and despite Clara’s and others’ concern for the Aborigines, whose gnamma holes were fouled by camaleers and whose wells were emptied by sheer force of numbers, Clara’s interactions with Aboriginal women, were limited to one, friendly, contact.

Goldfields Girl is an inspirational story for 9-14 year olds. It provides a window on a world more than a hundred years ago where people worked hard physically, made do, and experienced heartbreak, loss and tragedy. Clara is the story of a courageous and resilient young woman.

Thanks to Elaine Forrestal for bringing her story to us.

It’d make a nice Christmas present for someone!

* This review was written by Sharon Delmege