Home 2019 July 8 Regardless of what the Federal Court says, you shouldn’t put ‘flushable’ wipes down the loo

Regardless of what the Federal Court says, you shouldn’t put ‘flushable’ wipes down the loo

Flushable wipes have won a victory in the Federal Court, but you still shouldn’t put them down the toilet.

On Friday the Australian Federal Court found in favour of Kimberly-Clark’s “flushable wipes” in a legal action brought by the Australian Competition and Consumer Commission (ACCC).

There was insufficient evidence to convince Justice Gleeson that Kimberly-Clark’s wipes were primarily responsible for significant blockages and were therefore unsuitable for flushing down the toilet.

This was a very different outcome to a 2018 court case, also in the Federal Court, in which White King Flushable Wipes were fined A$700,000 for misleading claims.

The water industry has responded with disappointment to the latest ruling. Sydney Water claims 75% of sewer blockages involve wet wipes. Part of the problem is that, once flushed, wipes are anonymous and the blame for blockages cannot be laid at a specific company’s door.

This case highlights the need to determine what “flushable” really means. Does it mean you can physically flush it down a toilet? Or that it will biodegrade without major issue in the sewerage system, in the manner of toilet paper?

In the aftermath of a sewer overflow, “flushable” wipes are entangled in the vegetation. Sydney Water Corporation

ACCC Chairman Rod Sims explained that the commission pursued the case against Kimberly-Clark because of increasing reports from Australian water authorities of “non-suitable products being flushed down the toilet and contributing to blockages and other operational issues”.

Consumer groups such as Choice have also expressed concern about the impact of these products for years. Choice has produced a video that demonstrates how poorly some wipe products disperse in water, compared with toilet paper.

What is all the fuss about?

Blocked sewers are deeply unpleasant for everyone involved: professionals who have to unblock them, local residents, and the animals and plants that live nearby.

This is also linked to another chronic problem in sewers: fats. These mainly come from cooking fats and oils that coagulate in sewers. They have combined to create horrific “fatbergs”, often photographed with disgusted fascination. 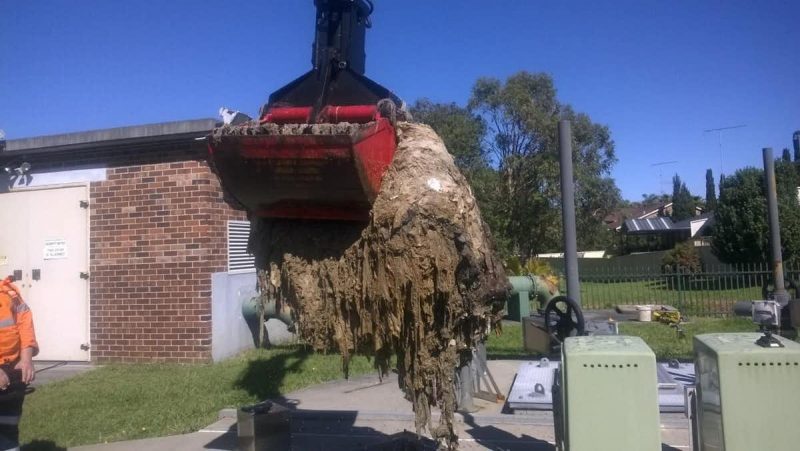 ‘Fatbergs’ are made when fats and oils coagulate in sewers, trapping other material – like so-called ‘flushable’ wipes. Courtesy of Sydney Water

Much less common are the images showing the discharge of liquid sewage due to the blockages. In my previous career as a scientist in the water industry, I visited hundreds of such scenes.

They are smelly and unsightly, but of more concern is the public health hazard they pose. Raw sewage is dangerous due to its abundance of disease-causing organisms. Overflows can happen anywhere, often in very public places.

Sewers are underground, and often beside waterways. This means they might be blocked and leak raw sewage for weeks before it is noticed.

Drought and trees are also contributing to the problem wipes pose. Currently much of southeastern Australia is in drought. Many trees in our cities are desperate for water, and their roots invade sewers.

Wipes and similar materials are readily entwined in tree roots. Wipes have a well-known tendency to become entangled and accumulate gradually to build a blockage.

Whose standard do you believe?

The industry body Water Services Australia is currently working on an Australian industry standard for testing “flushability”. This is expected later in the year.

On the other hand, many wipes companies claim their products do break down when flushed – although Kleenex, for example, advises not flushing more than two wipes at a time. These wipes comply with an existing industry standard for “flushability”, although this standard was developed by two trade associations that represent wipe manufacturers.

The development and application of a comprehensive Australian standard is urgently needed to address this problem.