Home 2019 July 3 An incredible journey: the first people to arrive in Australia came in large numbers, and on purpose

An incredible journey: the first people to arrive in Australia came in large numbers, and on purpose

This is so interesting. We keep on learning and theorising about just how, and how long ago, the first migrants made it to Australia.

The size of the first population of people needed to arrive, survive, and thrive in what is now Australia is revealed in two studies published today.

It took more than 1,000 people to form a viable population. But this was no accidental migration, as our work shows the first arrivals must have been planned.

Read more:
Australia’s coastal living is at risk from sea level rise, but it’s happened before

Our data suggest the ancestors of the Aboriginal, Torres Strait Islander, and Melanesian peoples first made it to Australia as part of an organised, technologically advanced migration to start a new life.

The continent of Australia that the first arrivals encountered wasn’t what we know as Australia today. Instead, New Guinea, mainland Australia, and Tasmania were joined and formed a mega-continent referred to as Sahul.

This mega-continent existed from before the time the first people arrived right up until about 8,000-10,000 years ago (try this interactive online tool to view the changes of Sahul’s coastline over the past 100,000 years).

When we talk about how and in what ways people first arrived in Australia, we really mean in Sahul.

We know people have been in Australia for a very long time — at least for the past 50,000 years, and possibly substantially longer than that.

We also know people ultimately came to Australia through the islands to the northwest. Many Aboriginal communities across northern Australia have strong oral histories of ancestral beings arriving from the north.

But how can we possibly infer what happened when people first arrived tens of millennia ago?

It turns out there are several ways we can look indirectly at:

Our two new studies – published in Scientific Reports and Nature Ecology and Evolution – addressed these questions.

To do this, we developed demographic models (mathematical simulations) to see which island-hopping route these ancient people most likely took.

It turns out the northern route connecting the current-day islands of Mangoli, Buru, and Seram into Bird’s Head (West Papua) would probably have been easier to navigate than the southern route from Alor and Timor to the now-drowned Sahul Shelf off the modern-day Kimberley.

While the southern route via the Sahul Shelf is less likely, it would still have been possible. 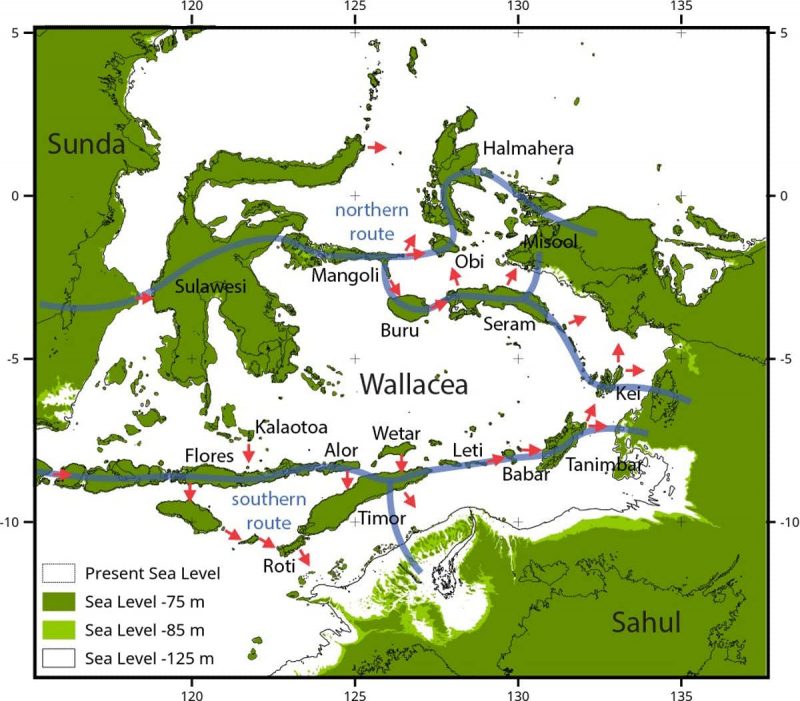 Next, we extended these demographic models to work out how many people would have had to arrive to survive in a new island continent, and to estimate the number of people the landscape could support.

We applied a unique combination of:

Our simulations indicate at least 1,300 people likely arrived in a single migration event to Sahul, regardless of the route taken. Any fewer than that, and they probably would not have survived – for the same reasons that it is unlikely that an endangered species can recover from only a few remaining individuals.

Read more:
Even if you were the last rhino on Earth… why populations can’t be saved by a single breeding pair

Alternatively, the probability of survival was also large if people arrived in smaller, successive waves, averaging at least 130 people every 70 or so years over the course of about 700 years. 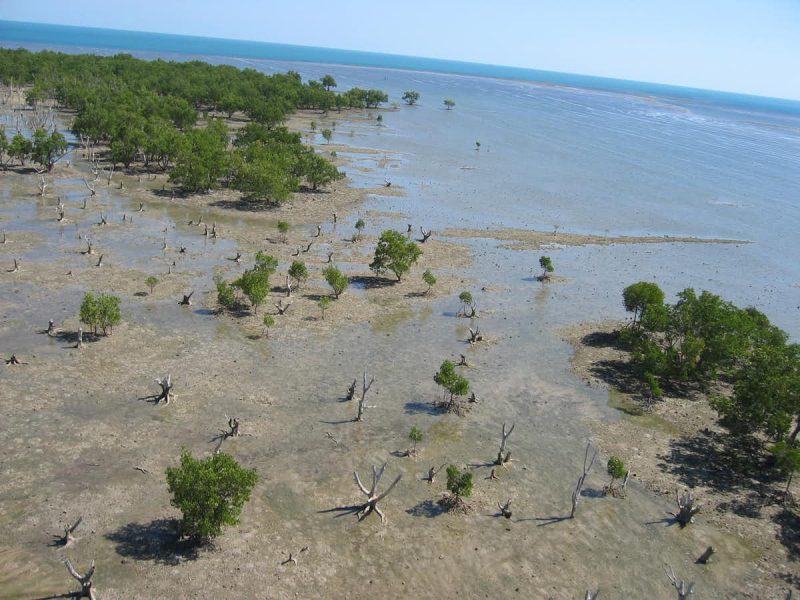 As sea levels rose, Australia was eventually cut off from New Guinea around 8,000 to 10,000 thousand years ago. Corey Bradshaw

Our data suggest that the peopling of Sahul could not have been an accident or random event. It was very much a planned and well-organised maritime migration.

Our results are similar to findings from several studies that also suggest this number of people is required to populate a new environment successfully, especially as people spread out of Africa and arrived in new regions around the world.

The overall implications of these results are fascinating. They verify that the first ancestors of Aboriginal, Torres Strait Islander, and Melanesian people to arrive in Sahul possessed sophisticated technological knowledge to build watercraft, and they were able to plan, navigate, and make complicated, open-ocean voyages to transport large numbers of people toward targeted destinations.

Our results also suggest that they did so by making many directed voyages, potentially over centuries, providing the beginnings of the complex, interconnected Indigenous societies that we see across the continent today.

These findings are a testament to the remarkable sophistication and adaptation of the first maritime arrivals in Sahul tens of thousands of years ago.